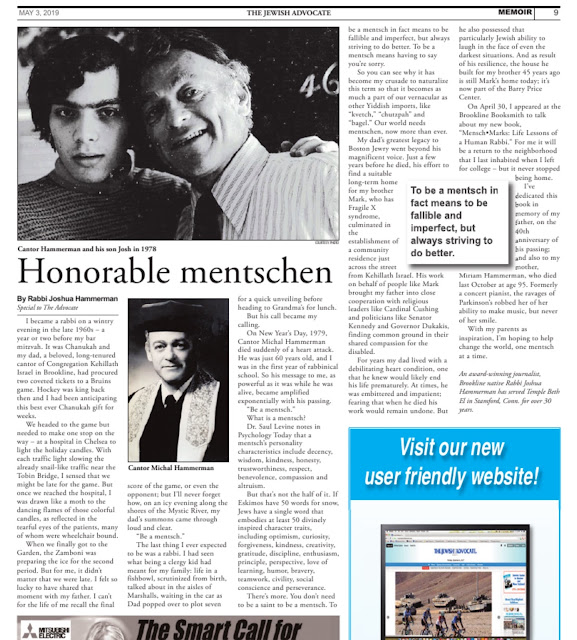 MEMOIR
| May 01, 2019
By Rabbi Joshua Hammerman
Special to The Advocate 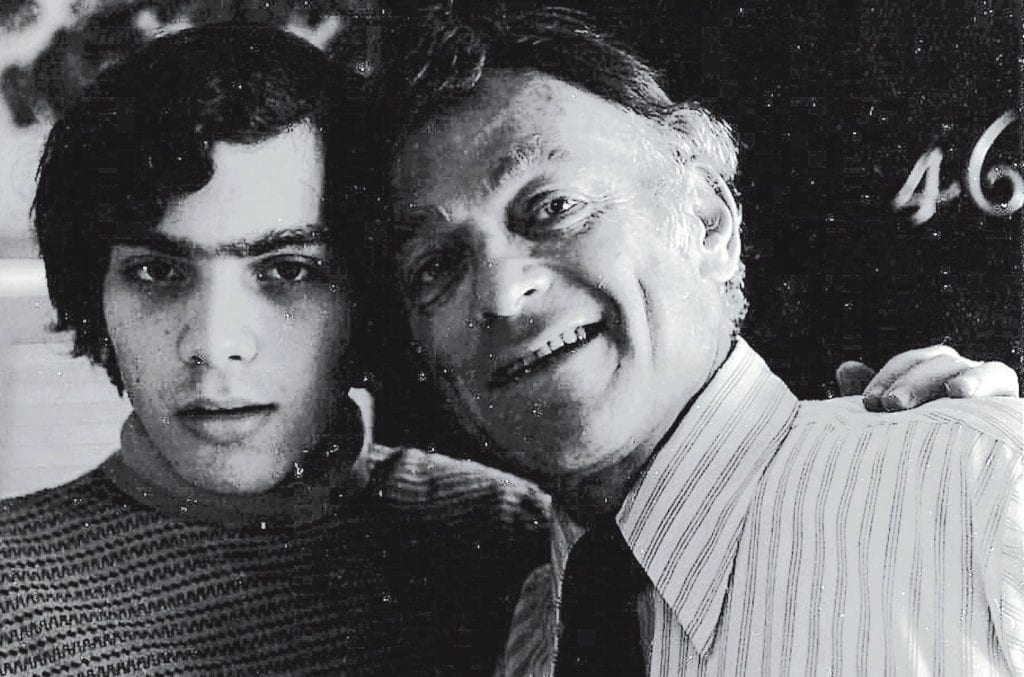 Cantor Hammerman and his son Josh in 1978 COURTESY PHOTO
I became a rabbi on a wintry evening in the late 1960s – a year or two before my bar mitzvah. It was Chanukah and my dad, a beloved, long-tenured cantor of Congregation Kehillath Israel in Brookline, had procured two coveted tickets to a Bruins game. Hockey was king back then and I had been anticipating this best ever Chanukah gift for weeks.

We headed to the game but needed to make one stop on the way – at a hospital in Chelsea to light the holiday candles. With each traffic light slowing the already snail-like traffic near the Tobin Bridge, I sensed that we might be late for the game. But once we reached the hospital, I was drawn like a moth to the dancing flames of those colorful candles, as reflected in the tearful eyes of the patients, many of whom were wheelchair bound.

When we finally got to the Garden, the Zamboni was preparing the ice for the second period. But for me, it didn’t matter that we were late. I felt so lucky to have shared that moment with my father. I can’t for the life of me recall the final score of the game, or even the opponent; but I’ll never forget how, on an icy evening along the shores of the Mystic River, my dad’s summons came through loud and clear.

Cantor Michal Hammerman
“Be a mentsch.”
The last thing I ever expected to be was a rabbi. I had seen what being a clergy kid had meant for my family: life in a fishbowl, scrutinized from birth, talked about in the aisles of Marshalls, waiting in the car as Dad popped over to plot seven for a quick unveiling before heading to Grandma’s for lunch.

But his call became my calling.

On New Year’s Day, 1979, Cantor Michal Hammerman died suddenly of a heart attack. He was just 60 years old, and I was in the first year of rabbinical school. So his message to me, as powerful as it was while he was alive, became amplified exponentially with his passing.

What is a mentsch?

But that’s not the half of it. If Eskimos have 50 words for snow, Jews have a single word that embodies at least 50 divinely inspired character traits, including optimism, curiosity, forgiveness, kindness, creativity, gratitude, discipline, enthusiasm, principle, perspective, love of learning, humor, bravery, teamwork, civility, social conscience and perseverance.

So you can see why it has become my crusade to naturalize this term so that it becomes as much a part of our vernacular as other Yiddish imports, like “kvetch,” “chutzpah” and “bagel.” Our world needs mentschen, now more than ever.

My dad’s greatest legacy to Boston Jewry went beyond his magnificent voice. Just a few years before he died, his effort to find a suitable long-term home for my brother Mark, who has Fragile X syndrome, culminated in the establishment of a community residence just across the street from Kehillath Israel. His work on behalf of people like Mark brought my father into close cooperation with religious leaders like Cardinal Cushing and politicians like Senator Kennedy and Governor Dukakis, finding common ground in their shared compassion for the disabled.

For years my dad lived with a debilitating heart condition, one that he knew would likely end his life prematurely. At times, he was embittered and impatient; fearing that when he died his work would remain undone. But he also possessed that particularly Jewish ability to laugh in the face of even the darkest situations. And as result of his resilience, the house he built for my brother 45 years ago is still Mark’s home today; it’s now part of the Barry Price Center.
On April 30, I appeared at the Brookline Booksmith to talk about my new book, “Mensch•Marks: Life Lessons of a Human Rabbi.” For me it will be a return to the neighborhood that I last inhabited when I left for college – but it never stopped being home.

I’ve dedicated this book in memory of my father, on the 40th anniversary of his passing; and also to my mother, Miriam Hammerman, who died last October at age 95. Formerly a concert pianist, the ravages of Parkinson’s robbed her of her ability to make music, but never of her smile.

With my parents as inspiration, I’m hoping to help change the world, one mentsch at a time.

An award-winning journalist, Brookline native Rabbi Joshua Hammerman has served Temple Beth El in Stamford, Conn. for over 30 years.
at May 01, 2019